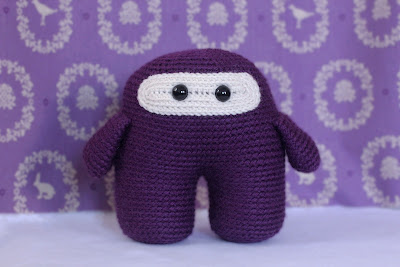 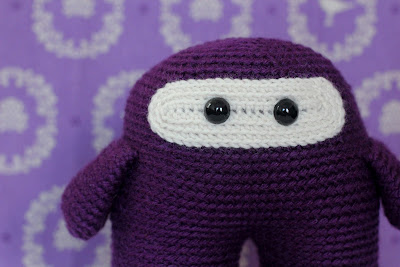 meet my purple ninja...
i'm calling her Sumire (japanese for violet, like the flower).


Sumire is headed to Camp Brainstorm in Bastrop, TX where she'll become the stealthy (and squishy) bestie to a brave girl or boy with epilepsy.

the plushie drive for Camp Brainstorm is being organized by the Purple Stitch Project (PSP), a web-based charitable organization founded by Vickie Howell that raises awareness about epilepsy and collects handmade gifts for babies, children, and teens afflicted with the neurological disorder.

there are several free patterns available (crochet, knitting, and some sewing projects too!) on the PSP website... Vickie hopes to give a plushie to every child that attends Camp Brainstorm this year and there is still time to add your plushie into the mix! donations need to be received by July 20th... all the information for the drive is here.

i made my plushie ninja using techniques i learned in Stacey Trock's Design Your Own Monster class on Craftsy.com and since it's so very close to her Mr. Toothy pattern (which you receive in the class materials) and this FreshStitches monster pattern I've decided not to write up the pattern to share (unless i get permission to later). if you know a little bit about amigurumi construction then i'm sure you could figure out my ninja's details with a few tips... 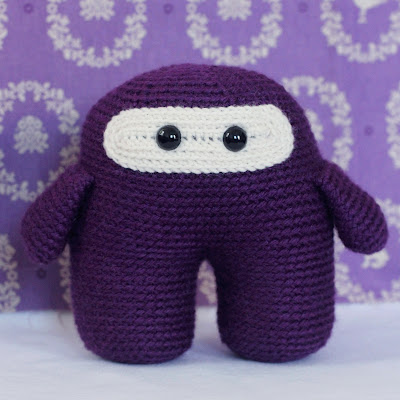 1. the ninja was crocheted from the bottom up.
2. the arms are not stuffed and were crocheted into the main body not stitched on later.
3. the mask is a long oval. there aren't a ton of visual aids out there for crocheting an oval so it's on my to do list this week to get a step by step pictorial MAYBE even a video... but we'll see. for now here is how i initially figured out how to make an oval.

thanks for stopping by to check him out! if you have some spare time and some purple yarn in your stash think about stitching up your own purple plushie to donate to PSP and the kids at Camp Brainstorm ♥

We have one of these little guys, er, gals! We think the PSP is awesome! I may need to learn to crochet so I can help give back through this wonderful charity! :)